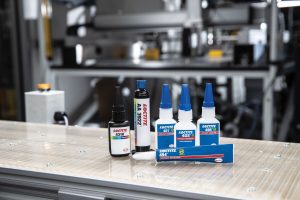 Among the highlights of the Henkel stand was the new Loctite 402 adhesive which is designed for the assembly of small components and quick maintenance repairs.

The cyanoacrylate instant adhesive develops handling strength twice as fast on most substrates by comparison with other assembly solutions (three to 10 seconds), said the company.

This single component product remains three times stronger on most metals at temperatures up to 150°C and offers sustained hot strength performance on selected metals at 135°C, continued Henkel; a big benefit for products whose power supply and connectivity generate a lot of heat.

The company’s continuous development of adhesive formulation has resulted in notable improvements such as higher service temperatures, the ability to cure through light surface contamination and improved curing on inactive metals without the need for a primer.

The company also showcased its ability to provide a complete turnkey package, with standard and bespoke dispensing systems. A cross section of both manual and automated systems was also featured on the stand.