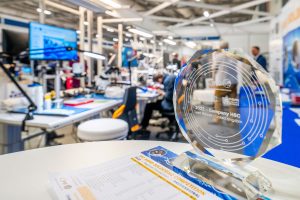 Skilled competitors demonstrated their expertise in hand soldering PCBs as the IPC hosted its popular Hand Soldering Competition (HSC). There were 15 competitors, representing 11 electronics companies from the UK.

A technically challenging competition board was introduced this year which resulted in only two of the competitors successfully completing a functioning circuit board assembly.

IPC thanks Polygone CAO, who designed this year’s competition board in accordance with IPC-A-610H criteria and featured 116 components – it provided a significant challenge to competitors,

Other regional competitions are planned in Budapest, Nuremberg and Paris later this year. For registration forms, visit the IPC’s HSC-dedicated page.